Blinking an LED - The C Way

After doing a couple of projects in assembly, I’ve started over again in C, but this time I’ll be publishing the projects. The purpose of this is to:

To start off this series of posts, I’ll use the simplest example possible, which is blinking an LED. I’ll be using the avr-gcc toolchain to compile. The microcontroller I’ll be using is the Atmel AVR ATtiny2313 until I start to run out of space or pins. Unless an example requires it, the fuses will be set so that the microcontroller runs at 1MHz. 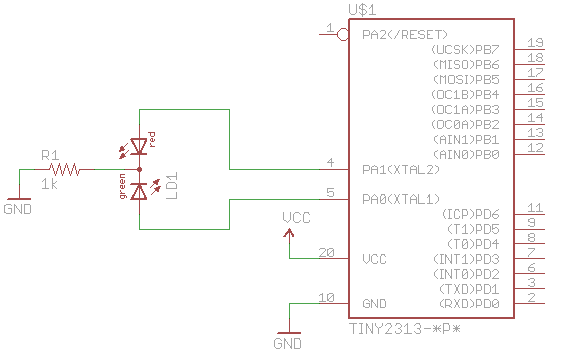 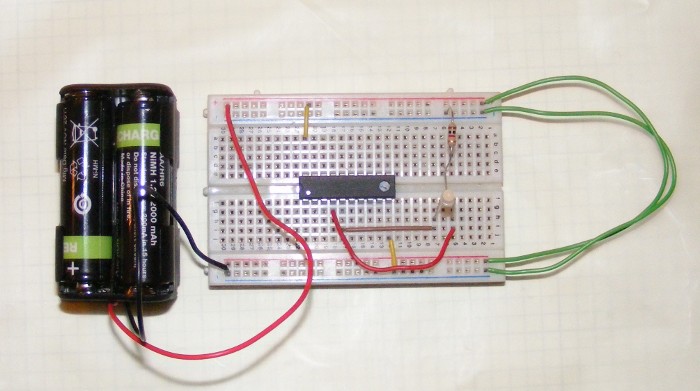 Fuses - To change clockspeed and other basic features such as using the reset pin as IO, AVR microcontrollers uses fuses that are set when programming. Other microncontrollers may do things differently, right now my only experience has been with AVRs that uses fuses and a Freescale HCS08 chip where the clock was set in code. The fuse calculator provided by Engbedded is what I personally use to calculate what I need to set. Fuses only need to be set once, even if you program the chip multiple times.

Anode/Cathode - An anode is where current flows into an element, the cathode is where it flows out. In the LED I’m using, there is a common cathode, so I only need to connect that to ground (with the resistor of course). The two anodes of the LED are connected to their respective pins.

One thing to note about using _delay_ms() is the resolution. From the <util/delay.h> reference page.

This isn’t a problem, since we don’t need such a small resolution.

Checking /usr/lib/avr/include/avr/builtins.h, this builtin is defined along with the accompanying __HAS_DELAY_CYCLES macro. So there’s nothing to worry about in the first place.

If the microcontroller is programmed properly, the LED should be flashing a combination of the two colors (an orange-y color in my case).